What is fly fishing?

What is fly fishing?

If you've been out and seen someone fly fishing and have never tried it, you're probably wondering what the fuss is about, it looks complicated, looks like too much work, so why would anyone want to do it? We are diving into what fly fishing is, and why we like it and why it's really not too complicated after all. 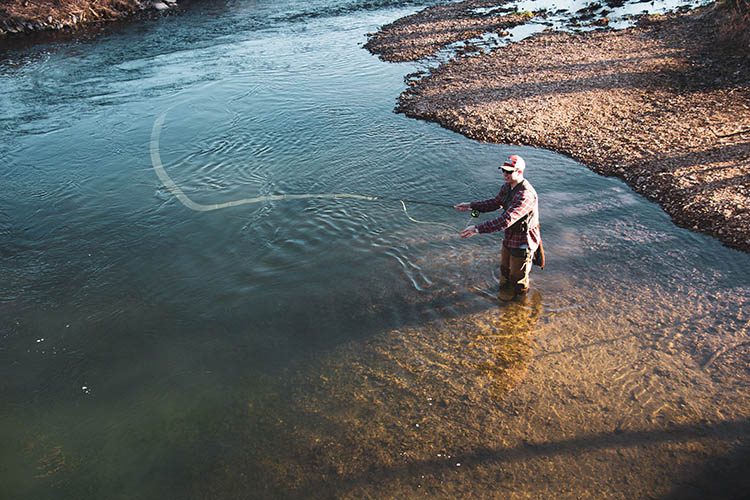 You’ve probably seen it in movies, possibly while driving through the mountains, or even on some advertisements. It’s this strange way of fishing that looks much too complicated to consider, the fisherman has all this gear hanging from his vest or a big sling pack, waders, and this extremely long rod. Why in the world would anyone ever fish this way? It’s so over complicated.

You want to know, what is fly fishing, well, it’s what some of us like to call the complicated art of fishing. However, it’s not all that complicated, it just looks that way. In reality a little practice and some patience and it’s just another way to catch fish. To most of us, it’s a very artistic way to fish, everything from the cast to the flies you use has an art to it.

The cast takes practice, there is an art to it, you have to think of it as flicking a paint brush, you want to sling that paint straight ahead and throw it as far as you can so you have to give a good flick. When casting, you’re creating large loops and timing is key. This along with the weight of your fly line is what’s actually casting your fly. Unlike traditional baits or lures, flies have very little weight to them, normally comprised of feathers and thin string tightly bound to create an insect imitation, these lures or flies don’t have much in them to add weight.

When getting started fly fishing you may wonder, why are the fly rods so long? Well since you’re relying on the fly line for weight to get your fly on the water, you need a longer rod to help do a few things. One is to load the line. When you do this, you’re sending energy to the rod to help cast the fly. When you are making a forward or back cast and the weight of the line puts a bend in your rod, your rod is storing energy to make that next cast, thus loading the line or loading the rod.

Having a longer rod can also help your casting distance, it holds more line which means it will be able to shoot more line too. This is why when someone is spey casting they use such long fly rods, sometimes up to 15ft long. A note here, heavier lines generally help cast further, but a lot of it really comes down to form and how well you can cast. Longer rods also come in handy when doing what we like to call euro nymphing, rods such as switch rods come into play here because they’re generally 10-12ft in length and allow the fishermen to reach distances with the rod without needing to make long casts.

Making long casts is not important when getting started, long casts are not needed nearly as often as some may make you believe. You’re always seeing people making giant casts with loads of line on the water and in all reality it’s generally not needed. One of the best days of fishing I have ever had, I learned one of the best lessons. That lesson was from an old man who was catching more fish than anyone. He asked why I was casting so far, I said, "to get to that side of the river and catch fish in that good-looking spot without disturbing them." He asked me, “What about the fish on this side?” Well I had never thought about it, so I fished starting about 3ft in front me, I caught several fish, next I went to about 6ft, caught a few more, I did this until I had worked from one side of the river to the other. I had not caught any fish that day until then, I fished the same small area of stream for about an hour and caught about 10 nice trout. I was new, I thought I needed to make larger casts, what I really needed to do was fish all parts of the water, not skip large areas by casting long distances.

Fly fishing is not that difficult, in fact, in my eyes it's the better way to fish. You’re continuously working and moving, it’s harder to get bored when not catching fish. You’re probably going to get out fished by your buddy with a baitcasters but when you don’t it sinks in and you begin to really feel it. You’re going to make great friends, the fly-fishing community is very friendly; just go make friends, learn new things, and enjoy your time on the water. Fly fishing takes you to beautiful places, lakes are pretty but mountain streams, or rivers down in gorges are so much prettier. You hear fast moving water, there’s no one else around, no motors, just wildlife and the sounds of nature. If you’re lucky in some places you’ll have, deer, elk, bear, you name it come walk into the river as you’re fishing and there’s nothing cooler than that.

It all seems tough and confusing at first but once you’ve learned to cast and know a few flies to use, you’re all set. You don’t have to have a lot of gear to start, these items help in ways but they’re not essential from the start. As you get into it, you’ll probably be given more gear than you’ll buy, you’ll get yourself an expensive pair of waders, and you’ll start picking up little things as you need them.

The two biggest pieces of advice I can give when getting started fly fishing are number one, don’t buy cheap gear, save your money and get the best because you’ll have it forever. The second thing is when you’re talking to an old guy on the water don’t rush your conversation, watch him fish, pick his brain, and learn from him. He will most likely teach you a thing or two, he will probably give you a handful of flies, and he will probably be one of your best fly-fishing contacts you’ve got. If you’ve been on the fence, now you know some of the basics, best thing you can do to learn more is to simply give fly fishing a chance.